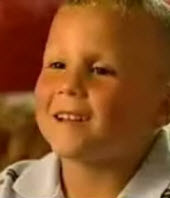 In a universe of wunderkinds with exceptional talents, there is one child whose story deserves to be read and shared.

It is the life of a prodigy born with a gift that was neither inherited nor developed until after it was fully appreciated by his family.  It is the story of a child whose love of a game in addition to his parent’s devotion is helping him enjoy a life that could have been lost.

Little Kyle Lograsso was 18 months old when his parents discovered him imitating a golf swing he had seen most likely on television. First he used the TV remote as his golf club and later brought in sticks to more closely imitate what he had seen.

His parents watched his progress and enthusiasm with awe since they neither played the game nor demonstrated prior interest.  They were never certain what it was he saw on television that inspired him to practice. His father searched for a coach who was able to demonstrate by a comparison video that Kyle had a swing that was significantly like Tiger Woods.

However, by the time he was 2 years old, a white speck on his left eye was subsequently diagnosed as retinoblastoma. Without surgery, the little pro would die within months. He survived the procedure and now wears a prosthetic eye which he has used with comic effect to tease his sister.

This child is a beautifully poignant example of how someone so young can prevail over daunting challenges in his pursuit of who he is meant to be.

For more of Kyle’s story, you can also visit his home page.