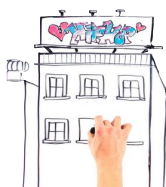 Here is a wonderful video, created by Sam Siedel.

It illustrates … literally! … the concept of “Hip Hop Genius” – a way of viewing the transformation of education.

.. Drawings were done by Mike McCarthy, a student at College Unbound , a school that exemplifies many of the values espoused in the film. the entire video was shot in College Unbound’s seminar space, where Mike has built a studio for his company Drawn Along .

The end sequence was shot by Graham Wheeler, a recent graduate of the East Bay Met, a high school that also embodies many of the principles of Hip Hop Genius. Graham and Mike edited the whole video as well.

The beat at the end was made by DJ Tek, who worked with me at the AS220 Broad Street Studio back in the day… our work there was the genesis of much of my thinking about Hip Hop Genius.  Several of the young people in the video are or have been affiliated with that program.